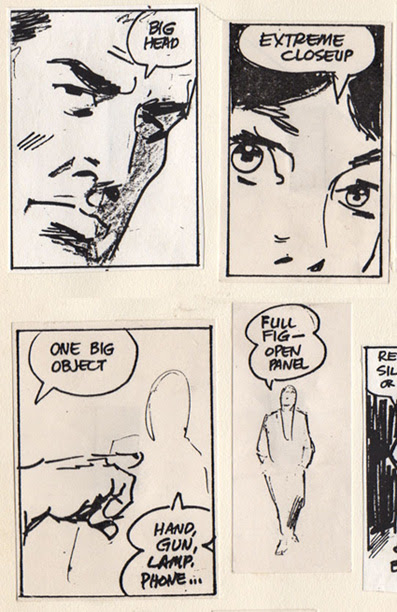 I worked for Wally Wood as his assistant in the early '70s, mostly on the Sally Forth and Cannon strips he did for the Overseas Weekly. I lettered the strips, ruled borders, swipe-o-graphed reference, penciled backgrounds and did all the other regular stuff as well as alternating with Woody on scripting Cannon and Sally Forth. The "22 Panels" never existed as a collected single piece during Woody's lifetime. Another ex-Wood assistant, Paul Kirchner had saved three Xeroxed sheets of the panels that would comprise the compilation. I don't believe that Woody put the examples together as a teaching aid for his assistants, but rather as a reminder to himself. He was always trying to kick himself to put less labor into the work! He had a framed motto on the wall, "Never draw anything you can copy, never copy anything you can trace, never trace anything you can cut out and paste up." He hung the sheets with the panels on the wall of his studio to constantly remind himself to stop what he called "noodling." When I was starting out as an editor at Marvel, I found myself in the position of having to coach fledgling artists on the basics of visual storytelling, and it occurred to me that the reminder sheets would help in that regard, but three eight-by-ten pieces of paper were a bit unwieldy, so I had Robby Carosella, the Marvel photostat guy at the time, make me re-sized copies of all the panels so I could fit them all on one sheet. I over-compensated for the half-inch on the height (letter paper is actually 8 1/2 by 11) so the main body of images once pasted up came a little short. I compensated for that by hand lettering the title.